Ringo Ando is the main protagonist of Puyo Puyo 7 and the main protagonist (Puyo Puyo side only) of Puyo Puyo Tetris along with a few other characters. She exists in yet another different universe to Arle and Amitie, and is taught how to play Puyo by Arle when her school is flooded with Puyo. Ringo is more down-to-earth than Arle and Amitie, is quite an intellectual person, but her curiosity does make her question many things, including, but not limited to the quirks of the game of Puyo Puyo. She is not above being weird herself, being known to spontaneously sing in the moment with improvised lyrics. She resides in the town of Suzuran and her home is located in Ando Family Fresh Produce, a family business at the town's shopping district. She is incredibly afraid of ghosts, reason being that they're "unscientific beings.", or simply not real. 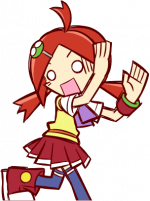 Ringo throughout all appearances is a young girl with green eyes and red hair with two ponytail curls. Her hair is decorated with a green Puyo clip on her right bang, which on occasion changes expressions. Her appearance changes between games, but her most common attire is a yellow sweater vest and a white shirt decorated with a short tie, red skirt with white rims, a red and green wristband, blue thigh high socks, and red and white boots or high-tops. In Puyo Puyo 7, she had the school blazer instead of the vest; and in Puyo Puyo Tetris, she wore a gray sweater with a yellow diamond trim and loose white socks.

Ringo is the most logical headed of all the characters, trying to think of solutions to problems and likewise tends to be curious about learning and experimenting. Once even in Puyo Puyo!! 20th Anniversary, she questions why Puyo pop when you connect 4. Because she's the one that normally points out the holes in logic, she tends to get angry or terrified when she quickly realizes things aren't right, or don't have a scientific explaination. Again, this goes as far as even questioning the very nature of the Puyo Puyo series itself, like why characters resolve everything with a Puyo Puyo match. Her smarts even occasionally causes a quirk where she replaces certain words with math terminology. However she can have a cheery disposition otherwise, even occasionally singing blissfully.

In her childhood days, she developed an immense fear of ghosts from listening to her grandmother's ghost stories. To her, she believes they're too unscientific to understand, further amplifying her fear of them. (She is also afraid of Yu and Rei, because they are indeed ghosts.) The mere presence of them is enough to make her scream in terror.

A running gag is her "shock" expressions. Whenever something particularly baffling or horrifying happens, Ringo will express it with blank white eyes, a wide open mouth, her ponytail curls straightening out, and a rougher outline than normal. She will also throw her arms away and may jump back.

Notably she initially lacked the ability to use magic due to being a normal student, but after being exposed to the mysterious light she learned how to use magic from playing Puyo. Even then she's not as versatile as some characters, mainly focusing on electric magic. Her spells are Sine, Cosine, Tangent, Integral, and Permutation (the latter two spells are replaced by Algorithm and Calculus in the Puyo Puyo Tetris English dub), all of which reference mathematical concepts. Integral/Algorithm is represented by Ringo using a math book as a weapon, and Permutation/Calculus is a move that is similar to the Bayoen technique used by Arle, though whether or not it has paralysis or emotion-rending abilities is unknown.

Ringo thinks of Lemres as a "super suspicious guy" whenever she encounters him.

He and Ringo are childhood friends, living in the same district.

Risukuma is senior to her, and the two are on respectful terms with each other.

Ringo is the central protagonist of this game, having been plunged into a sudden crisis at her home town of Suzuran. After quickly being taught how to pop Puyos by Arle, she attempts to solve the mystery behind the raining Puyos.

Ringo is one of the 24 playable characters of Puyo Puyo!! 20th Anniversary, with her story featuring as the first route. Her story begins with Ringo along with Maguro and Risukuma in their physics clubroom. Ringo is doing an experiment to test how exactly Puyos disappear when four of the same color come together. She notices bubbling flasks on the table and asks Risukuma what those are for. Risukuma explains that he is in the middle of a very dangerous experiment that will explode if it fails, so they have to be careful. Right after, it does exactly that.

She finds herself transported in front of an unknown mysterious forest, Later introduced as Primp Town by Amitie, and decides to search for Maguro and Risukuma.

Ringo's first opponent is Onion Pixie. Ringo tries to ask Onion Pixie about the people she's looking for, but offends him instead when she states that he looks delicious. After a Puyo battle, Onion Pixie leaves, and Ringo has learned no new information.

Ringo's second opponents are Yu and Rei. Ringo finds them while wandering around in a graveyard. Yu is excited to have someone to scare, and cheerfully tells Ringo that she will be cursed. Ringo is at first confused, and asks if they are ghosts. Upon their confirmation, Ringo screams that she is afraid of unscientific things. To keep them from coming closer, Ringo beats them at a Puyo match and then runs away.

Ringo's third opponent is Amitie. While singing about how she's completely lost, Amitie finds her. From Amitie, Ringo learns that she is in Primp Town. After a friendly puyo match, Ringo asks if Amitie has seen Maguro or Risukuma. Amitie says she has not, but will help Ringo search.

Ringo's fourth opponent is Lemres, who appears in front of them when he hears that Ringo is hungry. Lemres offers Ringo candy, but she finds him suspicious. Amitie asks Lemres if he's seen Maguro and Risukuma, and Lemres confirms that he has, but he will not tell them where unless they take his candy or beat him at a Puyo match. Ringo jumps into battle, completely ignoring Lemres' candy-taking statement. Afterwards, Lemres tells them that he saw Maguro near the ocean. Ringo says "Thanks, super suspicious guy!" and heads off with Amitie, leaving Lemres confused.

Ringo's fifth opponent is Maguro. Ringo and Maguro are relieved to be reunited, and have a Puyo match to convey their feelings (much to Amitie's confusion). Ringo asks if Maguro is with Risukuma. Maguro says he is not, but he heard shouting in a certain direction likely to be Risukuma. Ringo is certain the peculiar noises are Risukuma, and they go together to check it out.

Ringo's sixth opponent is Risukuma, who is still shouting. Ringo is excited to see him, but Risukuma is in the middle of destroying things. When Ringo asks him why he is angry, Risukuma states that it is because he felt hopeless at getting completely lost. In order to calm him down, Ringo challenges him to a Puyo match. Afterwards, with the three friends finally reunited, Ringo begins to think about how they can return to their original world. Amitie suggests going to see Arle, who, coincidentally, also came from somewhere.

Ringo's seventh opponent is Arle. Arle says that she thought she saw someone like Ecolo drifting around just now, and if Ringo is in Primp Town then it must have been Ecolo. Arle then begins to worry that Ringo may be possessed by Ecolo. To prove that she is not, Ringo challenges Arle to a Puyo match. Afterwards, she asks Arle to guide everyone to Ecolo.

Ringo's eighth and final opponent is Ecolo. Ringo immediately accuses Ecolo of being up to no good, but soon realizes that Ecolo has lost their memory. All Ecolo remembers is that puyo battles are fun, and they ask Ringo to play one with them. Afterwards, Ecolo wanders off happily, but Ringo is uneasy. Amitie suggests that Ringo stays in Primp Town a little longer, since Ringo is worried about Ecolo and Arle does not know how to return to her previous world either. Ringo, Maguro, and Risukuma decide that they'll stay and think carefully about how to get back home.

Ringo narrates ominously about how later Ecolo would drag Primp Town into a whirlpool of chaos. The end to this plot can be found in the Extra Route.

Ringo is wary as usual when she comes across Ecolo, but when she realizes that Ecolo is feeling down, she invites Ecolo to a Puyo match to cheer them up.

Ringo accompanies Maguro throughout his route, often demanding that he shows his "Beauty Beam" (Showing his face) to unfortunate victims. Technically, every opponent Maguro battles is due to Ringo's meddlesome nature. She battles him twice.

Ringo, Arle, and Amitie all feature as equal protagonists in "Puyo Puyo Tetris". (Along with a few other characters.)

Ringo is available as a red card in this game, added on June 17, 2013. She is in the same series with Maguro, Lemres, Risukuma and Feli, having similarly distributed skills and stats. She is only obtainable from the Apple Festival event from June 17 2013, or the Ringo Returns quests first released October 16 2013.

Ringo is available as a Green, Recover type playable character in this game.

Ringo is no longer the protagonist in this game, and takes longer to be recruited than other fellow protagonists.

Ringo is one of the playable characters in this game to play in the tournament.

"A student at Suzuran Junior High. She's quite curious... but also quite easily-distracted!"

"A middle-schooler from the Suzuran Shopping District. Smart, curious, and loves a good puzzle... but she's terrified of ghosts."

Character Select, All Clear and Results

Due to the large number of images for Ringo Ando, the gallery is moved to a separate page. See Ringo Ando/Gallery.