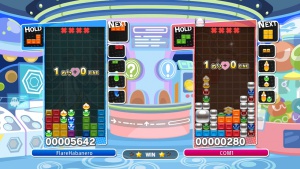 Both players starting a combo

Puyos and Tetriminos fall in an 8 x 17 board , as opposed to the standard 6 x 13 Puyo board or 10 x 20 visible Tetris playfield. Familiar rules from the respective games still apply; Puyos pop when connected in a group of at least four, and a full horizontal line of Minos will be cleared from the board. If either a Puyo or Mino fills any of the four red X's at the top, the player loses.

Regardless of difficulty, four Puyo colors are always used. In order to aid with dropping pieces, the game will highlight the respective pieces on the board (i.e., a currently dropping Puyos will highlight all other Puyos on the board; the same applies for Tetriminos). Fusion borrows the Hold Piece mechanic from Tetris, which allows players to also store Puyos for later use. Other polyominos like single minos and dominos appear in this mode as well.

Chain voices progress in the order of (Chain 1 - Chain 2 - Chain 3 - Chain 4 - All Spells in order), though Tetris (and Tetris Pluses), counters, and "lucky chains" (chains from after Puyo fall back on the field after being crushed) interrupt this sequence and moves to the next.

Chaining with Puyos in Fusion works similarly to Active mode in Puyo Puyo!! 20th Anniversary, where Puyos can be controlled mid-attack animation. Players no longer have to wait for Puyos to pop before placing down another set, and any follow-up pops will count as an additional chain. Additionally, any line clears done with Tetriminos will contribute to the player's overall accumulated chain, as indicated by the hovering "X CHAIN + Y LINES" text on the player's board.

If no Puyos have been popped or lines have been cleared in roughly half a second, the overlay text disappears and the chain counter resets to zero. "Splitting" Puyo groups can extend the time the player has to continue the chain.

As Puyos occupy space on the board, Tetriminos cannot move freely through them. However, by placing the Tetrimino on them, they can be "crushed". Tetriminos can either descend slowly through a stack of Puyos with Soft Drop, or quickly crush them with a Hard Drop. If the player uses Soft Drop to crush Puyos, they will be able to control other pieces as it falls. Once the Tetrimino reaches either the bottom of the playfield or lands on a Mino, all crushed Puyos will fall back into place from the top of the field. If a line clear or chain does not occur after the Puyos fall, the currently active chain will end. It's possible to place another Tetrimino atop one which is crushing Puyos with Soft Drop, which can allow one to clear 5 or more lines at one time (a Tetris Plus).

Garbage Puyos will only drop onto the playfield if there is no chain active and the player places a piece which does not clear anything. They occupy space like Puyos, but give no score for being cleared, and disappear entirely upon being crushed by a Tetrimino.