Fever (Puyopuyo Fībā, ぷよぷよフィーバー) the name of the rule introduced in Puyo Puyo Fever, and is the default rule set of said game and its sequel, Puyo Puyo Fever 2, coming with a modified of it called Trap. Fever mode also introduced the concept of dropsets and different character chain powers.

The Fever rule introduces the concept of continuous offsetting, where making a chain of any length prevents queued Garbage Puyos from falling and adds one point on the player's Fever gauge. This allows the player to place another piece on the playing field. A player can continuously offset with each of their upcoming pieces. If a player places a piece without triggering a chain, the queued Garbage Puyos will drop.

The continuous offsetting mechanic is a contrast to other classic modes where offsetting can only be done once; After making a chain of any length, any remaining Garbage Puyos will drop on the player's playing field.

The Fever gauge is a seven-point meter located near a player's playing field. Whenever a player offsets incoming Garbage Puyos, they fill one space in their Fever gauge. Once the Fever meter is filled, Fever mode begins. 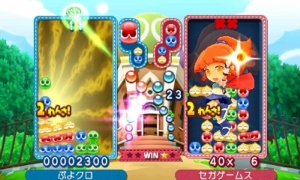 A player who has entered fever mode in Puyo Puyo Chronicles.

Fever mode starts once the player completely fills up their Fever gauge. When the player enters Fever mode, the music and the background image of their board changes to a more dynamic background. During Fever, preset chains ranging from three to 15 in length are dropped into the player's field one by one. Successfully clearing a chain rewards the player with a bigger chain while failing to do so gives them an equal-sized or shorter chain. This works as follows:

The player will receive a chain one chain longer than they cleared. This applies even when a chain is extended. For instance, if a player extends an eight-chain to a nine-chain and clears it successfully, they will be given a ten-chain.

Achieving an all clear rewards the player with a chain two chains longer than what they cleared, even if it is one or more chains off.

The player will receive an equal-sized or shorter chain depending on how short they are from achieving the required chain clear length.

Off by one chain

The player will receive an identically-sized chain.

Off by two chains

The player will receive a chain one chain less than what they cleared.

Off by three chains or more

The player will receive a chain two chains less than what they cleared.

When a character receives a Big Puyo, the Big Puyo takes the color of the center/first Puyo of the pair. The second color that came with the piece is pushed on to the next pair/L/J/swirl. For example, a player using Arle receives pieces in the following colors (colors being denoted by letters): RR BB GG YY RR BB GG YY. However, a player with a Big Puyo as their 4th piece in their sequence would instead receive: RR BB GG [Y] YR RB BG GY YX.

Normally, swirl sets double both colors of the pair. However, if the pair of colors that a piece should have are both the same color (monochromatic), the swirl set instead use that color and a randomly chosen 2nd color. For example, if Arle receives a RR piece, the swirl set that could be made out of that could be a RG, RB, RY, or RP.

In Fever 1 and 2, 3-Sets alternate between L and J form after every Big Puyo.