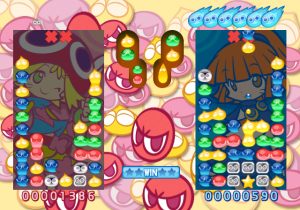 A player has cleared the star.

When the match starts, the game drops a random assortment of Puyos onto your field, along with a star at the bottom of the field surrounded by Hard Puyos. The objective is to clear any Puyos that are in your way and to clear the star before your opponent does. It is still possible to defeat the other player without clearing the star, although it is hard due to the increased target points.

When a player clears their star, the rules change slightly. Offsetting is disabled for the rest of match, and the opponent is sent an endless amount of Garbage Puyos, which simply shows up as 6 Comet Puyos in their nuisance tray.

Excavation is always played with 4 colors, except during matches in the early levels of story mode where 3 colors are used.

In Puyo Puyo!! 20th Anniversary, the mode is mostly the same, the only differences in this version is the addition of an optional quick drop and filling up the 4th column will no longer cause the player to lose. This game also includes a slight variation of this mode called Mini Puyo Excavation, which is played on a 10x18 field.

The only major difference between difficulty levels is the number of rows of Puyos you start with on your field.