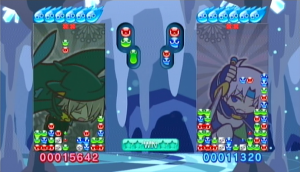 Both players after clearing the star.

Mini Puyo Excavation is a variant of Excavation, using a 10x18 instead of the standard 6x13 board. To compensate, unlike Excavation normally, Mini Puyo Excavation always uses 3 colors. The objective is to dig through the Puyo in order to reach the star on the bottom, protected by Hard Puyo that needs to be cleared twice. Once at the star, the player needs to clear the star by creating a chain adjacent to it. This will cause the opponent to receive an endless supply of Nuisance Puyo, forcing them to lose.

While the objective is to dig at the star, where the star is placed and how the Puyo are formed varies between games. Because of this, the most ideal way to reach the star is to prioritize clearing columns close to the star and to find the best place to put a Puyo in order to create a chain reaction. While technically it's possible to beat the opponent without clearing the star, the high target points means that normally chains will be very weak, meaning unless the player can create a massive chain traditional methods shouldn't be relied on.