The Tsu (ぷよぷよ通, Puyopuyo tsū) rule is the name of the game mode introduced and heavily utilized in Puyo Puyo Tsu. It brought many improvements over the standard rule used in Puyo Puyo (1992), with the most notable ones being offsetting and All Clears.

To this day, the Tsu rule is widely considered the standard for Puyo Puyo matches, and has been present in every Puyo Puyo game since.

The basic idea of a match under Tsu rules is the same as under original Puyo Puyo rules, in that you want the opponent to fill up their third column and lose. 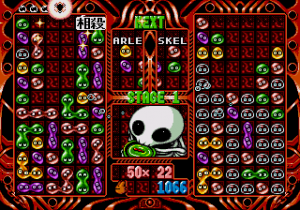 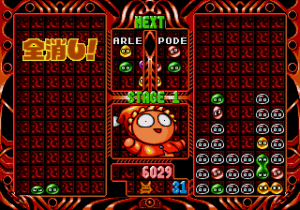 A player has preformed an All Clear.

A less important addition to the Tsu rule is the concept of margin time, with the intention of preventing matches from lasting too long. Margin time states how long it will take before the target points start to decrease, having the effect of each chain sending more Garbage Puyos. At its most extreme level, it can allow a player to send at least 40 Garbage Puyos from just a 1 chain.

The difficulty level effects how many colors the player will receive and how many Garbage Puyos they will start out with on their field.