The Sun rule refers to the set of rules used by Puyo Puyo Sun, which revolves around that game's sunny theme with the introduction of its own type of Puyo. The ruleset is featured in Sun, Puyo Puyo Box, Puyo Puyo!! 20th Anniversary, and Puyo Puyo Chronicle with Pocket Puyo Puyo~n utilizing a hybrid of Sun and Yon rules.

Sun rule retains every Tsu rule mechanic except its All-Clear bonus (and on handheld releases, even that is retained). The arcade version of Sun has a default margin time of 48 seconds, the shortest in the entire series; this is reverted to the Tsu-standard 96 seconds in all other implementations of the rule.

The eponymous Sun Puyo separates Sun rule from other rulesets. When a player offsets Garbage Puyos, the sun placed in the middle of the field glows red. After a brief second, the sun sends Sun Puyo(s) to each player's field. Columns that are about to receive one or more Sun Puyos are indicated by a beam of light. Once the player places their currently-controlled pair of Puyos, the Sun Puyos fall into place. In the console versions, and SEGA-developed versions, Sun Puyo will fall into each column from left to right in that order. In the Game Boy version and Pocket Yo~n, they act more like garbage and fall randomly: this can be toggled in the SEGA-developed versions by activating the Classic voice cheat.

Sun Puyo placement takes priority over Garbage Puyo placement, meaning that the player will not receive Nuisance on any turns where at least one Sun Puyo is waiting for them. However, the player can receive Garbage Puyos if their chain finishes before the sun is able to release its Sun Puyos. This can be thought of a precursor to the continuous offset in Fever onwards, but can only stop garbage from coming for a few turns. 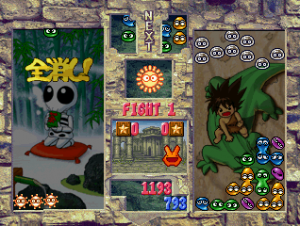 All Clears only give Sun Puyo equal to the chain used to clear it, and nothing else. For example, Skeleton-T getting a 3 chain in his all clear got him 3 Sun Puyo as the reward.

Unlike other games, Sun features two hidden rows instead of one. This second hidden row can be used to make a chain longer than a 19 chain, the 20 chain, which is the longest featured in any main game's ruleset to date. This is not recreated in later implementations of the Sun ruleset, including Puyo Puyo!! 20th Anniversary and Puyo Puyo Chronicle.