Marle is a character introduced in Puyo Puyo Tetris 2. At first, she appears to be responsible for mixing the worlds of Puyo Puyo and Tetris. After Chapter 4, Marle becomes an ally of the group and is revealed to be a watcher of the worlds who ensures that all battles are fun. 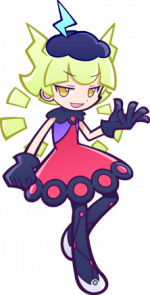 Marle's alternate artwork depicting her appearance in the earlier part of the Adventure Mode.

During the protagonists' early encounters with her, Marle appears to be a young girl with short cut light yellow-green hair and half-lidded gold eyes. The upper tips of her hair are styled in a fashion similar to lightning bolts, and the back of her hair frays outward to points on both sides. Atop of her head is a black cloud with a blue lightning bolt protruding out of it. Her bangs are cut irregularly and their shape resembles an "M", with the middle bang being round and the left and right ones being straight cut. Behind her are pieces of disjointed hair in rectangular pieces, resembling sunrays. She wears a pair of black gloves, an outfit primarily hued with black, red, and purple decorated with circle motifs, black stockings, and white-tipped shoes.

Upon being freed from Squares' possession, her dress changes to a cyan color accented with orange and white. Her stockings, gloves, and cloud are now white, while her shoes are black. She has amethyst purple eyes and her hair now has three curls, and the disjointed parts of her hair reconnect into a chain of circles. Her curls seem to change along with her emotions, unfurling slightly when she's surprised, and taking on a lightning bolt shape when she is angry.

Outside of the Adventure mode, Marle's true form is default when selecting her, while her possessed form can be selected by pressing the button which would switch to her alternate voice on the character selection screen, similarly to how "extra" characters such as Red Amitie and Strange Klug are selected in Puyo Puyo!! 20th Anniversary.

At first, Marle's personality appears to be playful, mischievous, and thrill-seeking, as she's seen explaining to Ringo her desire for everyone to have many battles so they can all have fun. She seems to speak politely but playfully, dragging out her vowels and often ending her sentences with music notes. She begins to show signs of distress throughout the game, and becomes increasingly conflicted once the others challenge her thinking of "fun," with Arle assessing that she isn't doing anything of her own volition.

In reality Marle is a polite, friendly, and thoughtful person. She seems to take her responsibility as watcher of the worlds rather seriously, as she mentions that during the first merging of the worlds in Puyo Puyo Tetris, she and Squares refrained from directly interfering with the actions of the cast. She is extremely grateful for the heroes' efforts in freeing her from Squares' control and making him realize the error of his ways, and Ally's assistance as well.

As the Will of the Worlds, Marle is able to observe and travel to different puzzle worlds as she pleases. She is also powerful enough to create another cosmological being, Squares, to become her companion.

In battle, Marle's spells include Annulus, Circular Dance, Pastel Orb, Shiny Bubble, and Heavenly Sphere, all of which are themed after circles. While under the control of Squares, her spells have a square-like element to their appearances. For instance, Heavenly Sphere depicts a cube instead of a sphere while she is under his control.

Squares
Squares is Marle's creation, fellow watcher of the worlds, and younger brother. Ally notes that she has a lot of love and care for him.