Popoi is a black cat who is usually being held by Accord. Accord claims that he is a talking puppet. 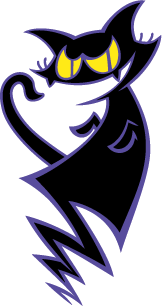 Evil Popoi (Aka the "Prince of Darkness")

Popoi is a black cat, he resembles a stuffed animal or some kind of puppet. He has another form which only appears in Puyo Puyo Fever and Puyo Puyo!! Quest known as "Evil Popoi".

Compared to Accord's mysterious behavior, Popoi is a bit more frank with the students. Frequently making fun of or scolding characters such as Amitie for their inattentiveness or otherwise clumsy behavior.

Accord
While he and Accord have been together since their debut, the exact nature of their relationship is shrouded in mystery. Accord claims to be a puppet in spite of his seemingly independent sentience. He also says that he does not always know what Accord is thinking. On Accord's side, she seems to know more about his secrets and attempts to buy time for him to prepare in Puyo Puyo Fever before he faces Raffina.

Akuma
Akuma seems to be threatened by Popoi's presence as presented in Puyo Puyo! 15th Anniversary and claims that he will tear off the mask that he and Accord are hiding behind.

He is the final boss of the game, claiming to be the "Prince of Darkness." This, however, may be just an act set up by Accord, as he is "not ready yet" by the time Raffina shows up at the castle. Amitie regards him with seriousness, not accusing him of being a puppet, while Raffina believes that he is totally false and set up by Accord. After his defeat, he mysteriously appears with Accord, no worse for wear, in the endings.

Popoi only appears as a cameo character with occasional lines in cutscenes involving Accord. He also appears as her fourth spell (Popoi Lance) in every game starting here, where he's thrown at the screen.

In Puyo Puyo!! 20th Anniversary, he runs the shop, where the player can exchange points for Puyo skins, alternate costumes, voices, and trivia. More information about the trivia can be found at the article below.

If you continuously purchase his trivia, he will randomly give away Unusual Ecolo or one of the hidden modes ported from 15th Anniversary. On the PSP, Wii, and 3DS versions of the game, you can get 4 extra BGM from Puyo Puyo 7, listed as BGM 15-18.