Pair Puyo Puyo (ペアでぷよぷよ, Pea de Puyopuyo) is the name of the rule introduced in Puyo Puyo!! 20th Anniversary. Unlike other game modes, it features the concept of "sharing lives". It somewhat resembles the Deka Puyo Rush mode, because for every chain made by the player or their teammate counts as an additional chain. In the character selection, players with similar symbols (Sun and Moon, in contrast to the spade, heart, club and diamond symbols) will be teammates. 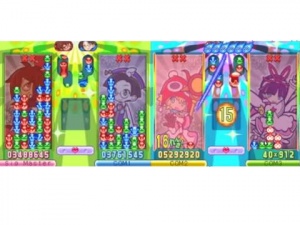 Both Red Amitie and White Feli is making the 15+ chains but have 6+ meteors in the nuisance line.

In Pair Puyo Mode, both players share lives, use dropsets and uses quick drop. The default number of lives is 3 (can be toggled to 1 or 5). This mode combines modified rules of Fever and Deka Puyo Rush, featuring continuous offsetting and incremental chains. See video here: Video

Chains in this mode are shared. When players a chain, they send Garbage Puyos to the opponent and the chain will be added, shown by the number in between the players' field. After a player chains, their teammate's field outline will flash yellow with a small yellow bar that rapidly decreases in amount. If their teammate did not make a chain within this this time frame, any accrued nuisance will be sent, forcing the team to start again.

Given this method of chaining, players can continuously send and delay queued Garbage Puyos by quickly and alternately making as little as a one-chain. However, this method also decreases the Garbage Puyo multiplier, making big chains made by small chains weaker in the long run.

A Synchro Chain is a special type of chain that sends more garbage and scores more points than usual. To activate a Synchro Chain, both players must fulfill the all of following conditions.

A chain will not count as a Synchro Chain if one or more of the conditions are absent.

Nuisance and Game over

Garbage Puyos are also shared between players. Garbage will only fall on either field under the following conditions.

If the conditions above are met, Garbage Puyos will drop on a player's field, still in increments of 30 at most. If either pair fills the space with an X, the team's total lives is reduced by one. They also receive a preset 4 chain, with all Garbage Puyos removed from their nuisance queue. The pair loses if all their lives are lost.

The player plays with 3 colors, and Puyo fall down slower.

The player plays with 3 colors

The player plays with 4 colors

The player plays with 5 colors

The player plays with 5 colors, and Puyo fall down sightly faster