Type da Puyo Puyo (たいぷdaぷよぷよ, Taipu da Puyopuyo) is a spin-off typing game released in 2001 for Windows PCs, featuring characters from the Puyo Puyo and Madou Monogatari series. It was developed in part by Biox Co., Ltd., a now-defunct video game development studio that provided outsourced development to Sega and other companies. It was the last game they developed.

The core gameplay aspect of Type da Puyo Puyo is largely the same as other, main Puyo Puyo entries. Pairs of Puyo fall from the top of the field and can be paired to make chains. However, the method of attacking is drastically different. It is designed to teach Japanese kanji characters through its gameplay. 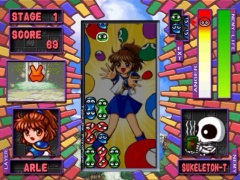 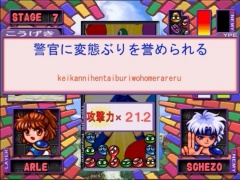 Stage 7, showing an example of the typing mechanic.

Instead of there being two fields on each side of the screen, there is only your field. Enemies instead have two meters, Danger and Life, shown on the right side. Over time, an enemy's Danger meter will slowly and automatically fill. When it reaches the top, a prompt to type a phrase will appear. If typed correctly, Garbage Puyo will be countered and not fall onto your field.

After you initiate a chain, a prompt will also appear. If typed correctly, your chain length determines how much damage you'll do to your opponent's Life meter with a multiplier. When the Life meter depletes, the stage is won. If Puyo fill your field, you lose.

As the stages progress, the phrases to type will become significantly longer and more complex.

There is a practice mode, where you are presented a short phrase to type after placing down a Puyo. Your next Puyo group will continue to fall down until you type the phrase correctly.