JUMP HERO (ジャンプヒーロー, Janpuhīrō) is a series of platforming games developed and published by Compile. The series has been released through Disc Station, on MSX2, PC-98, and Windows. Several "gaiden" games were also made.

Both JUMP HERO games on MSX and JUMP HERO for PC-98 are vertical platformers. The player (controlling Jyaboon in the MSX games and Billy or Ivan in the PC-98 version) must reach the top of the stage in the shortest amount of time possible, and do this through three different stages.

Screenshot from JUMP HERO on PC-98, showing Billy de Babine on a stage.

JUMP HERO Gaiden is a hybrid of a point-and-click adventure and a strategy game. The story focuses on Billy de Babine's journey to Chicken Island in order to participate in the Jump Hero Tournament. Each chapter begins with an "adventure" segment, and a "simulation" segment; the adventure segments have Billy and friends visit various islands and interact with objects and characters, which trigger the simulation portions, which involve moving units to attack foes in a gridlike manner.

Bomber Through GOGO! ~Jump Hero Gaiden 2~ is an action game, where the players (choosing either Billy, Linda, or Ivan) throw bombs at enemies in order to clear the stage. The game bears some similarities to Comet Summoner, as both share similar gameplay mechanics and level structure, as well as both having enemies spawn from statues of themselves. 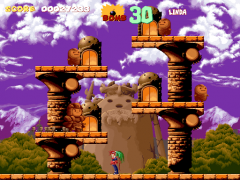 JUMP HERO Gaiden 3 is an adventure game, similar to games such as Rulue's Spring Break of Fists. The premise is that after a week-long cruise with Captain Honey, Billy, Linda, and Ivan are dropped off at the seaside city of Port Town and explore, while Honey takes the rest of their friends home. The trio decide to look into the mystery of the town, and run across various new characters, such as the kind Sugar and her vulgar doll Oligo.

JUMP HERO Gaiden 4 is an action platformer game, though now with a focus on more traditional stage design seen in other platforming games. The plot sees Billy traveling the various lands in order to stop an evil alien invader who has landed on Earth. There are three worlds Billy must venture through, each with various enemies as well as bosses.

The games featuring Prince Ivan, the penguin, are action platformers involving the character.