The most efficient way to chain is to build across the board instead of vertically. However, this presents a problem once you reach the wall. To continue chaining, you'll have to start stacking vertically. This act of stacking vertically is called Transitioning. After you construct a Transition, you can start chaining back in the other direction. Many players have trouble constructing Transitions due to the attention to color that it requires.

The most straightforward way to make big chains is to chain in layers, or floors. Basically, you make rows of chains on top of each other. 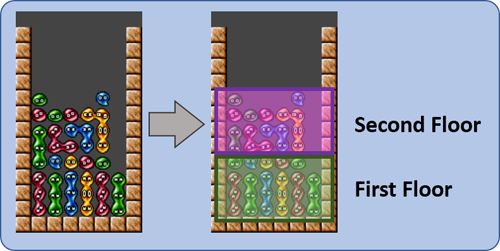 The group of Puyo that connect these two floors is called your Transition.

This is the most straightforward way to build a transition. You simply build straight up and then put the necessary colors on top (green/blues).

If you are using Stairs as a base, you should notice that it's troublesome to make a chain in which Columns 1 and 3 are the same color (Columns 4 and 6 if you're transitioning on the right).

In practice, there is a huge number of possible vertical transitions. For example, transitions with garbage or unused Puyos in-between, transitions using 3 or 4 columns instead of 2, or transitions connecting groups of 5 or more Puyos. The following chapters only show a few regular ones.

Sandwich to Sandwich transitions are Vertical Transitions which connect two floors containing Sandwiches. These transitions make it possible to build a chain by using only the standard Sandwich forms (2-1-1, 1-0-3, 1-1-2, 3-0-1) on both floors. Optionally, also other forms can be connected to these transitions.

The following transitions require a height of 8 rows. They use standard Sandwich forms (either 3-0-1 or 1-1-2) as the first form on the second floor (yellow). The base (red) can either be a split 2-1-1 or a split 3-0-1 Sandwich. The green Puyo at the top right of column 2 is part of the next Sandwich on the second floor.

These transitions (and many of the Sandwich to Sandwich transitions in the following chapters) can also be built with only 3 colors. Furthermore, the color of the Puyo which connects to the next Sandwich on the second floor can also be varied.

There are additional forms which also require a height of 8 rows but which don't use a standard Sandwich as the first form on the second floor (yellow). Learning also some of these forms will help you become more flexible concerning the order of colors you get. The following examples could alternatively also be built with a split 3-0-1 Sandwich instead of a split 2-1-1 Sandwich as base (red). The green Puyo at the top right is part of the next Sandwich on the second floor.

It is possible to build the transitions even higher (height of 10 to 12 rows in column 1) to increase the length of the chain by one. These forms can be useful to make chains a little bit longer without having to know how to chain on the third floor or how to tail. The following examples could alternatively also be built with a split 3-0-1 Sandwich instead of a split 2-1-1 Sandwich as base (red, at the bottom). The green Puyo at the top right is part of the next Sandwich on the second floor. There are many forms of extra tall Sandwich to Sandwich transitions. Only a few of them are shown below.

GTR (Great Tanaka Rensa) is the most famous way to construct a transition. It's incredibly flat, quick and easy to make with most combinations of colors, and is used by both beginners and experts. There are also several variations of it.

New GTR is similar to GTR, except with a larger trigger point. One weakness of normal GTR is that using it as opening may cause you to miss out on All Clear starts. By using this extra bulky version, you reduce the probability of that happening. It all depends on what colors you're getting though.

GTR, except with stuff below it. Useful for putting pressure on your opponent because it can easily be reversed into a Hellfire.

Kanto Stacking (関東積み) Can function as both a transition, a reversible Hellfire, and a Tail end.

DeltaGTR is a variant used by Puyo eSport player Delta. It is an GTR with the horizontal part being two Puyos long instead of one. This is also called deltarune because the horizontal Y shape created resembles a game called Deltarune. Yes, really.

Something Kuroro made up. GTR except complicated.

Also another thing Kuroro made up. Basically, it's when you royally screw up your GTR from harassing a lot on top of it. Don't do this form ever.

Kamaitachi (かまいたち) is a special type of base that doubles as a Hellfire and can potentially be reversible.

A derivative of Kamaitachi invented by Kame, Kameitachi (かめいたち) functions in the same way. For reference, watch this video.

Not to be confused with DT Cannon.

DT Base, or Double Trigger Base (DT土台) is an transition made with L-shapes. It is an flexible but unstable form, so knowledge of color decisions can help when using this in chaining.

LLR is named after the Puyo shapes within the base. Referencing the Basic Form example below, it goes: L (red), L (blue), R (for reversible, the green). You'll need to know how to tail to make this form useful.

Fron Style (フロン積み) or fron stacking is a form named after the player Fron himself. It's similar to LLR except in reverse and can also be used as both a reversible and hellfire.

Tema Style (Tema積み) or Tema Stacking is named after the player Tema herself, despite the fact she never actually uses the form. Like Fron Style, it can be uses as a reversable and a hellfire.

Preemptively adding in a Puyo at the bottom makes it easier to chain on top later on.

Gets its name (座布団L字) because it looks like a Japanese sitting-cushion.

Slug Folding (なめくじ折り返し) contains elements of L-Shape. By constructing it as shown below, you'll have two trigger points. If you're rushing to complete your chain, there'll be less pressure and need for you to get a specific color since you have two options.

Sodomy Stacking (男色積み) gets its name from... use your imagination! This, and its Raised form, are popular ways to do a transition.

Using elements of Dam Stacking, the Sanagawa Transition (真川折り返し) can double as both a Power Chain (blues) or a normal chain.

Not exactly a transition, but Beetle (甲虫連鎖) refers to making a huge Tail on top of the transition to pad it. This is typically done using Saitou Special. See also: Multiple Stacking.

Alpine Flower (お花畑連鎖) can double as both a mega Hellfire and a Transition.

Not exactly a transition, but Multiple Stacking (多重折り) refers to padding your transition to use up more wall space and make your chain a little longer. Useful if your opponent is rushing you and you need to construct a Counter. Also useful if you want to counter a harassment; all you have to do is leave out a few Puyo from the stack so the rest of your chain doesn't pop.

DT Cannon, also known as Double Trigger Cannon (DT砲), is a type of multiple stack named by the player Tom. This form is meant to be placed on top of flat 3-long forms such as New GTR or Yayoi. The name comes from the fact that the chain has two "triggers" (meaning it can be set off in two ways), as well as the fact that this form appeared more than a year after Puyo Puyo Tetris was released.