The Collection Event (収集イベント) is a type of event in Puyo Puyo!! Quest, in which players play limited event quests to collect special items, and rewards are given by reaching certain numbers of items collected and overall ranking.

Players play the event quests to collect special items dropped in each stage. The items are considered collected only if the player successfully clear the quest. Higher difficulty quests costs more Stamina and have stronger enemies, but they also drops more of the special items.

When the player reach a designated number of items collected, you are rewarded with the featured character card, exclusive transformation materials for that character, as well as other materials (e.g. Material Puyos, Grimoires, 100-point Tests, Books of Secrets and Puslers) and items (e.g. Magic Stones, coins, gacha tickets and Stamina Herbs). Rewards obtained from this way will be delivered to the Present Box (プレゼントボックス) as they are rewarded.

The total number of items collected will also be ranked among all players who have participated in the event, and high rankers will receive additional rewards as the event concludes. Rewards obtained from this way will be delivered to the Present Box after ranking tally is completed (normally 00:30 JPT after the last day of the event).

In certain past events, a Lucky Number Campaign (ラッキーナンバーキャンペーン) will also be held with the event. Players can receive additional rewards after the event if the last digits of their final collected number have matching the randomly-drawn lucky numbers, or if the final number passed designated checkpoints.

In this wiki, a list of major rewards can be found at section "Rewards" in the respective event page.

Bonus Time (ボーナスタイム) are limited-time happenings that increases drop numbers in boss stages for a period of time. After each run of the event quests there is a chance that Bonus Time happens for 15 minutes.

Recently the event main menu also shows a Bonus Time Expectancy (ボーナスタイム期待度) gauge, indicating the likeliness to encounter Bonus Time. For each run of the event quests that did not trigger Bonus Time the gauge rises, denoting a higher chance for encounter in the next run. The gauge is reset to the base value once Bonus Time happens.

Previously, Bonus Time used to happen at a fixed schedule for all players, typically around noon and at night. Certain higher difficulty quests used to be exclusive to this time period. These setups are no longer the case.

Chance Boss (チャンスボス) are limited-time happenings that gives a one-off high number of special items. After each run of the event quests there is a chance that an Chance Boss appears for 10 minutes. You have to defeat the boss within a short time limit in order to receive the item drop. If you failed a battle (either by running out of time or being knocked out), you can retry for another cost of stamina as long as the appearance has not expired. Higher difficulty battles cost more Stamina, have a shorter time limit and stronger enemies, but they also drops more of the special items. 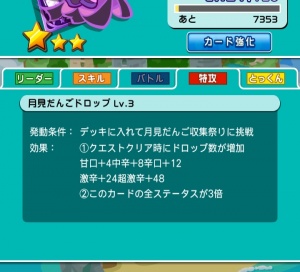 In this wiki, a list of Support Characters for each event can be found at section "Support Skill" in the respective event page. The Special Skills will also be shown in character/card pages for the duration of the event, together with a history of past Special Skills for previous events.

The following 78 pages are in this category, out of 78 total.