Gacha (ガチャ) is one of the major source to obtain cards in Puyo Puyo!! Quest. Players can use in-game currency or items in exchange for a card randomly drawn from a designated lineup.

Gachas can be categorized into three major types based on the currency/item used:

Unlike other gachas, Bundle Gacha for 2~9 rolls is not available in Magic Stone Gacha, and only 10-in-a-row Gacha (10連ガチャ) is available (costs

In compliance with regulations on gacha games in Japan, the game will list the exact appearance rates for all possible cards in all Magic Stone Gacha banners. This can be checked by tapping the See Appearance Rates (出現確率を見る) button.

There are also special campaigns that features one or more characters (or series of characters) that has higher appearance rates than normal and/or not available at all in normal Magic Stone Gacha, and/or different costs to roll than normal.

The following special mechanics may be available for some (but not all) Magic Stone Gacha campaigns:

See the below sections on information about fixture campaigns, available at specific occasions for the player. For limited-time campaigns, see the list of limited Magic Stone Gacha campaigns for details. 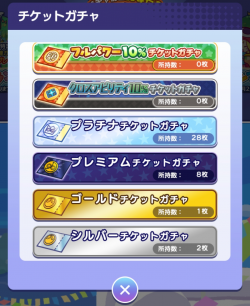 Ticket Gachas (チケットガチャ) is a collective term of the multiple gacha banners that uses gacha tickets (ガチャチケット) to roll.

There are currently three kinds of fixture gacha tickets, each with an exclusive gacha banner:

Certain gacha tickets and their gacha banners are only available for a limited time. See the list of Limited Ticket Gacha campaigns for details.

In compliance with regulations on gacha games in Japan, the game will list the exact appearance rates for all possible cards in all Limited Ticket Gacha banners in which the ticket is sold in paid packs. This can be checked by tapping the See Appearance Rates (出現確率を見る) button.

Summons Point Gacha (召喚Pガチャ) requires Summons Points to roll. This is the only gacha that has a chance to give out material cards including Power-up Materials up to [★6] Comet Puyos, Special Materials like Grimoires and 100-point Tests, and Puslers. 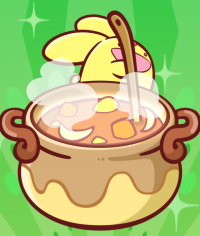 Carbuncle mixing a curry pot, as part of the Mix-up Summons cutscene

Mix-up Summons (まぜまぜ召喚) uses cards in the player's inventory instead of currency/items. Carbuncle mixes the cards used together in a curry pot to form a new card of designated specifications. In all Mix-up Summons, The output card:

This list may be incomplete, due to certain gachas not explicitly showing all possible outputs. You can help by expanding it.