While outdated, this page should help you get started. The most notable change is that you're asked if you'd like to skip the tutorial.
After confirming your name and starter card, the prompt appears following some dialogue: 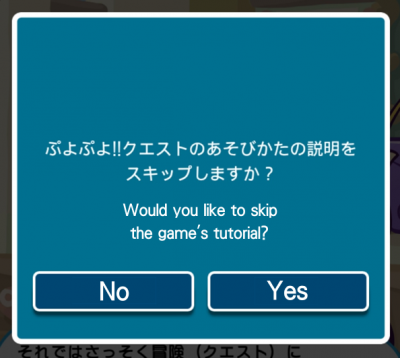 After the tutorial, the game forces you to roll on this gacha. It disappears immediately after.
It guarantees one Puyo Fest character from a select pool:

Don't overdo rerolling, as SEGA may issue a temporary ban or terminate your accounts.

If you plan to play casually, it is not recommended to reroll unless you really like a card/character.
There are plenty of opportunities to get Fests through tickets (handed out regularly from events) and Choice Mix-up (sacrificing 5 Puyo Fests for a card of your choice).

Below is a "tier list" categorizing the best starter Fest cards in terms of Leader Skill (LS).
While all starter cards are viable, some may be better suited for monocolor decks or are used for niche purposes late-game.

This outline shows what to prioritize if you intend to play the game long-term. 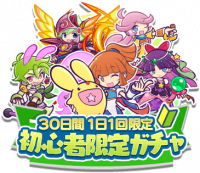 The following are commonly used terms in the Puyo Puyo!! Quest community.
Some may appear throughout this guide.