★7 Transform Board (★7へんしんボード) is the feature in Puyo Puyo!! Quest introduced on August 8, 2017, that further transforms ★6 cards into ★7 rarity. Unlike in normal Transformation Fusion, where designated material cards are used, players use PuyoVeggies and identical character cards to transform. 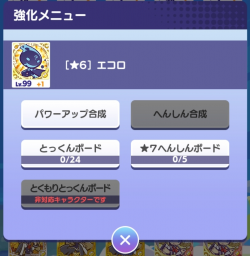 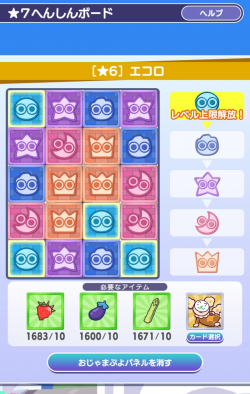 ★7 Transform Board and its Garbage Puyo Panel layout

The board consists of 20 Garbage Puyo Panels (おじゃまぷよパネル) in 5 different kinds to be removed one kind at a time, each time either raising the level cap or finally transforming to ★7:

The player is required to use the items listed at the Items Required (必要なアイテム) list to remove each kind of panels; additionally, the base card also have to be at the maximum level (Lv. 120) for the final step, including:

To commit one transformation step, tap Card Select (カード選択) to choose from a list which Sir Wilde/character card to use, and then tap the Remove Garbage Puyo Panels (おじゃまぷよパネルを消す) button.

There are three possible reasons where the transformation step cannot be committed, indicated either by a greyed-out, unclickable button or a subsequent pop-up:

Items exclusively used on ★7 Transform Board

Sir Wildes come in each of five attribute colors, as well as a designated cost. Each Sir Wilde card can only ★7-transform ★6 cards of the same color (Colorful Sir Wildes can be used by any color), and the Sir Wilde card must have cost equal or over the cost of the base card.

Sir Wildes are first given as rewards in Technical maps like Endless Tower and Tower of Steam and Darkness, and later in other events (including Collection, Guild Rush, Co-op Boss Challenge and Treasure) and campaigns. Sir Wildes can also be purchased in the PuyoPoint Exchange with PuyoPoints.

Wilde Stone (ワイルドストーン), or "WS" in short, are items usable in the ★7 Transform Board for only one specific character. Wilde Stones exist for only selected characters (see Category:PPQ:Characters with Wilde Stone). The icon for Wilde Stones is formed by overlaying the ★6 character card with the Wilde Stone frame of the same color:

For Wilde Stones with no use for in ★7 Transform Board (e.g. not owning base card to transform, already otherwise obtained ★7 card), players can exchange them into PuyoPoints in the Wilde Stone Exchange (WS変換所) in order to get other cards and/or items. See PPQ:PuyoPoint Exchange#Wilde Stone Exchange.