The Treasure Event (トレジャーイベント), also known as the running title of Treasure Hunters' Brigade (トレジャー見つけ隊), is a type of event in Puyo Puyo!! Quest.

Treasure Events use the following types of special items exclusive to the event type. These items are reset after each Treasure Event and will not be carried over to the next.

Map Search Quest (地図あつめクエスト) is the place for players to obtain Maps. A small amount of Silver Treasurecoins are also granted on completion.

Stamina is used to play Map Search Quest. Players can choose one out of three levels of stamina cost when playing, which also varies the rewards granted at completion.

Puzzle Shield Quest (ナゾ盾クエスト) is the main quest type for the event, with a heavy focus on the puzzle element instead of card stats and skills.

Maps are used to play Puzzle Shield Quest. Players can choose one out of three levels of map use when playing, which also varies the rewards granted at completion. 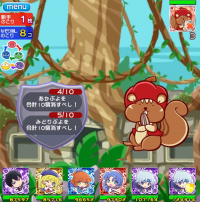 Enemies in Puzzle Shield Quests give ample time for the player to clear the Puzzle Shield goals with their longer turn count (typically 4~6). If the goals are not cleared before the turn count reaches zero, enemies deal very strong attacks that likely take out one or more of the player's cards. If the quest is failed or forfeited, some of the Maps used will be refunded to the player. 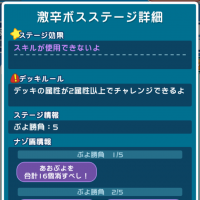 Each difficulty of Puzzle Shield Quest has various Stage Effects (ステージ効果) applied. All difficulties do not allow card skills to be used, with additional effects for some difficulties that can either ease or harden the quest. Some difficulties also specify Deck Rules (デッキルール) that the deck (including supporter) players bring into the quest must follow, often to make sure that all goals can be cleared. All Puzzle Shield goals, Stage Effects and Deck Rules can be viewed in the Stage Details (ステージ詳細) window accessed through one of these buttons: 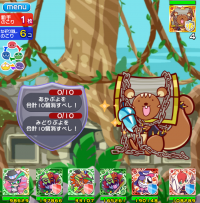 In certain stages, a Treasurerisu (おたからリス) might appear instead of the normal enemies. Clearing quests with a Treasurerisu appearance will grant more Gold Treasurecoins as Lucky Bonus (ラッキーボーナス).

In some openings of Treasure Event, certain difficulties would have their quest contents (including enemy lineup, Puzzle Shield goals, Stage Effects and Deck Rules) changed after being cleared. The new contents are randomly chosen from a pool of multiple possible sets. After failing or forfeiting such a quest, players can manually change the quest contents by tapping the Change Stage Contents (ステージの内容変更する) button in the Stage Details window. 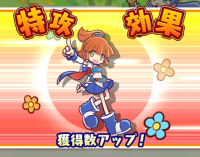 In this wiki, a list of Support Characters for each event can be found at section "Support Skill" in the respective event page. The Special Skills will also be shown in character/card pages for the duration of the event, together with a history of past Special Skills for previous events.

The following 7 pages are in this category, out of 7 total.