Everybody Battles (みんなとバトル) is the real-time player-versus-player battle mode of Puyo Puyo!! Quest, officially replacing the previous PvP system since 2016/09/14. 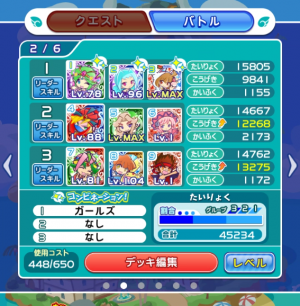 Players use Battle Decks (バトルデッキ) instead of the normal Quest Decks in the Everybody Battles mode. A Battle Deck consists of up to three groups (グループ), each with up to three cards. The HP of all cards in a group is totaled into one single HP gauge. The whole group is knocked out only when the combined HP is drained to zero.

In Everybody Battles mode, both parties of the battle are given a typical Puyo field to engage in puzzle gameplay, which functions largely as normal.

Battles in the Everybody Battles mode consists of two phases that happen alternatively: the puzzle gameplay phase and the attack phase (names not official). Unlike in normal quests where each side takes turns to act, both parties act at the same time in each phase.

Both parties are given a set amount of time (10 seconds) and may make as many trace-removals and chains as they can within the time limit. The time remaining in each phase is visible in the Time Left to Pop Puyos (ぷよ消しのこり時間) gauge above the top-right corner of the Puyo field. Attack power resulted from popping Puyos across the whole phase is temporarily stored and is not dealt to the opponent until the Attack Phase. 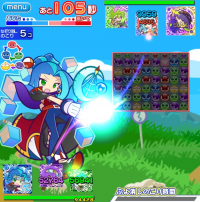 After the time is up in the Puzzle Gameplay Phase, the attack power stored by each party will be dealt to the opponent.

If both parties have stored attack power, the attacks from the two sides will clash together at the center and neutralize (相殺／そうさい) each other. Only the side that amassed higher total attack power will land its attacks and deal damage, with the damage reduced proportionally by the opposing attack power. Note that color effects and effects of critical attack leader skills are applied only after neutralization.

A battle is concluded either

At the time of battle conclusion, the party with more HP remaining by proportion of total HP of the whole deck wins, including knocking out all of the opponent's groups. The HP proportions are calculated before effects from Leader Skills, Battle Skills and/or Combination Bonus are applied. Note that it is possible for a party to win with fewer groups still standing than the opponent.

The remaining time (in seconds) and a Power Gauge (勢力ゲージ) showing the proportions of HP drained of both parties is shown on the top-left corner of the battle screen. 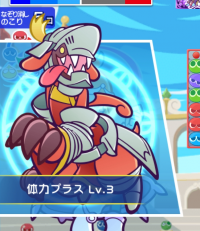 Battle Skills (バトルスキル) are skills owned by some cards that are exclusive for use in the Everybody Battles mode.

To activate a Battle Skill, the player has to pop a designated number of Puyos that is the same color as the card. Once the requirement is completed, the Battle Skill is activated automatically with a cut-in. The remaining numbers of Puyos required to activate Battle Skills of player-side cards is shown in a counter above the card. Players cannot see Puyo Left to Battle Skill counters for the opponent's cards.

Note that each Battle Skill can only be activated once for each trace-removal. Even if the party popped enough Puyos to activate the Battle Skill twice or more, the Puyo Left to Battle Skill counters will stop at 1 just before the second activation.

Battle League (リーグ戦) is the weekly ranked format of the Everybody Battles mode. Players gather League Points (リーグポイント／LP) by winning battles against COM opponents to ascend into higher leagues and rankings. A Battle League opens at 15:00 on each Wednesday and ends at 23:59 on the following Tuesdays.

In the Battle League format, players are separated into four Leagues (リーグ). Players begin in the C League initially. By completing designated conditions within one Battle League, players will become eligible for Promotion (昇格) in the next Battle League and can progress into higher Leagues. On the other hand, Demotion (降格) can also happen to S League players if they failed to upkeep a minimum ranking.

If a player's standing is currently eligible for Promotion or in danger of Demotion, a In Promotion Zone (昇格圏内) or In Demotion Zone (降格圏内) notice will be shown under their rank on the Battle League menu.

Within each League, players are put into 3 Classes (クラス) (e.g. Class C3, C2 and C1 for the C League) based on the victory rate of their most recent battles. Class *1 has the highest victory rate while Class *3 has the lowest. Other than the icon shown in front of the player name in player profiles, guild member list and support list, Classes currently do not affect PvP Battle gameplay or rewards.

For each battle in the Battle League, the player can choose their opponent from a random list of 10 drawn from the same League. The opponent deck may be checked in advance via the See Details (詳しく見る) button. Each opponent choice is assigned a Base LP (基本LP) of either 10, 30 or 50 to signify the difficulty. Stat adjustments will be applied to opponents so that those of higher Base LP will have higher stats when faced.

Completing battles in the Battle League grants Battle Points (BP), League Points (LP), coins and user experience (UXP) dependent on the difficulty of the opponent chosen, result of the battle and Magic Points used. Additional LP is also granted for winning three consecutive battles in the Battle League, equal to 1/3 of the original LP obtained in those three battles.

After the player defeating an opponent, if the opponent challenges the player and loses again, additional BP as Revenge Bonus (かえりうちボーナス) will be granted.

Individual Rankings (個人ランキング) are maintained in each League between all players across each week, beginning at 15:00 on Wednesdays and ends on the following Tuesdays (tallied until 00:05 on Wednesday). Rewards are awarded to players who obtained the highest LP totals of each League in the week.

See PPQ:Everybody Battles Cup for details on each opening of the event.

COM Battle (COMバトル) is a casual and unranked format of the Everybody Battles mode to battle COM opponents without affecting the Battle League standings. Battle opponents are randomly selected from the whole player base, not limiting to the player's current League. Magic Point usage in this format is optional. 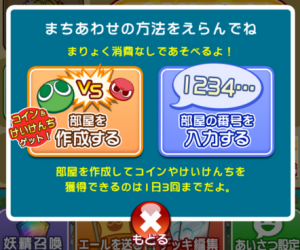 Appointed Battle (まちあわせ) is a casual and unranked format of the Everybody Battles mode in which two players battle each other. As of the 2017/10/27 renewal of the mode, this is the only format where players battle other players instead of COM opponents. Appointed Battles cost no Magic Points and players can participate as many times as they like.

Up to three times per day (resets 00:00), the host receives coins and user experience regardless of victory or defeat. This will be signalled by a "Get Coins & EXP!" (コイン＆けいけんちゲット！) badge over the Create Room button on the Appointed Battle menu.

Treasure Chest (宝箱) in the Everybody Battles mode gives rewards to players for actively participating in the Battle League or COM Battles.

One star is awarded for every group knocked out in Battle League battles or COM Battles, regardless of victory or defeat. After gathering 5 stars, players can open the Treasure Chest for one random set of rewards. The rewards lineup is better for players in higher Leagues. After each opening of the Treasure Chest, players can only resume gathering stars after a 6-hour cooldown.