Deck (デッキ) is the lineup of cards a player brings to quests or battles in Puyo Puyo!! Quest.

Cheering Deck (おうえんデッキ) is introduced in Version 9.0.0 released on 2020/02/17. This deck allows players to use their cards in reserve to further boost the stats of the cards used in Quest Deck. Cheering Deck is only available to players of User Rank over 200.

If three or more adjacent cards in a group has a common combination, then that group also gains Cheering Effect (おうえん効果), boosting one of the stats of all cards in that group. 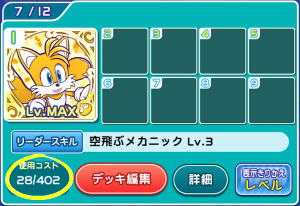 All cards are designated a cost (コスト) value, and deck cost (デッキコスト) for a deck is the total cost of all cards used. Players can only make decks up to their deck cost cap (デッキコストの上限), which increases with the user rank up to a maximum of 650.

See PPQ:User Rank for the deck cost cap for each User Rank.

One common reason for failure in Transformation Fusion and ★7 Transform Board is having one or more decks exceeding deck cost cap after the transformation. A Deck Cost Over (デッキコストオーバー) warning will be shown instead of proceeding. The player has to either free up enough cost space for the transformation by taking out other cards from all offending decks, or directly remove the base card from the decks. 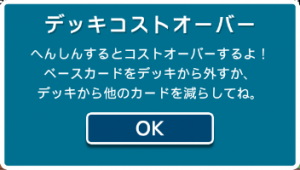 Each card can only have at most 5 combinations; for cards that can technically satisfy 6 or more combinations, only 5 will be assigned. Combinations may also change across rarities of the same character due to changes in the character art.

Note that the cards involved cannot include multiple of the same character or equivalent alts (e.g. Amitie and Sweet Amitie). Specific exceptions exist for the equivalence, for characters that although shares names but are actually different people (e.g. Klug and Strange Klug, Arle and Doppelganger Arle) as well as certain rare alts like Puyo Fest and Full Power cards. The supporter card is also exempt from this repeated card rule; Combination Bonus can be triggered to the supporter card even if another repeated card is already present.

1. the combination that involves more cards

2. the combination with higher priority

Cheering Effect (おうえん効果) is active when three or more consecutively adjacent cards of a group have a common combination. The whole group will receive a boost on one of the stats (either HP, Attack or Recovery). Which stat to boost and the boost rate is dependent on the combination triggered or the number of cards involved. The cards involved in the Combination Bonus will be signified by speech bubble with a megahorn.

Unlike in Combination Bonus, same character or equivalent alts can also be involved in triggering the effect.