A Guild (ギルド) is a in-game group of Puyo Puyo!! Quest players, available to players when they reach User Rank 20 (unless invited by guildmaster). Guilds provide a medium for players to socialize and collaborate in-game, give gameplay advantages over players not in a guild, and houses additional exclusive content. 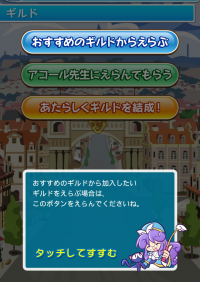 The Guild tutorial will initiate when a new player returns to the home screen after first reaching User Rank 20. Hosted in a sample guild, Ms. Accord briefly explains the layout of the Guild screen and major mechanics of guilds and the Farm, with a basic hands-on trial on planting and harvesting Farm crops.

After her explanations, the player is given three options to find the first guild:

At this point, the menu bar is greyed out, and the player has to either join or create a guild before being allowed to switch to other screens. This can be overridden by force-quitting the app and restarting.

Outside of the Guild Tutorial, players have additional options to search for a guild to join through the Guild Search (ギルドをさがす) function. Guild Search allows players to search by the guild name if it is known (up to 8 characters, matches from beginning). Players can also apply filters on the guild's recruitment status and playstyle. 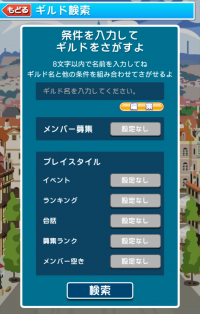 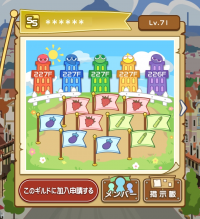 When visiting another guild that is open for application, players can apply to join by tapping the "Apply to Join This Guild" (このギルドに加入申請する) button.

Guilds may be set to one of two modes in dealing with incoming join applications:

The "Apply to Join This Guild" button can show three messages depending on the mode of the guild:

To leave the guild currently joined:

Note that when a member leaves a guild, the TP contributed by the member so far will be kept with the guild and not be refunded to the departing player. The "TP contributed" tally in the member list will also be wiped even if the member re-joins in the future.