First and foremost, you're gonna need to use monocolor teams. Rainbow teams won't cut it past floor 20 because enemies shield all but two colors. The colors you can use are:


Bold = Highly encouraged, almost mandatory. Using the other color will make you take double damage.
Italics = Encouraged for nearly all floors. You do less damage, but also take less damage. You may want to use the opposite colors in cases where you have to do a lot of damage very quickly, such as x9F (Caballoons).

In the guide, unless otherwise specified, I will be assuming that you use the recommended colors (bold/italic). 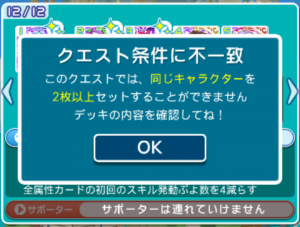 The error message that pops up if you try to enter a tower with two or more equivalent cards.

You can't use two or more of the same card when making your team. This means no duplicates and no equivalent cards. Equivalent cards include most alts, including collabs, with a few exceptions. Exceptions include PuyoFests and the Coffee Shop Girls Series. Exceptions are also exceptions of each other, so you can bring as many as you want provided there are no exact duplicates.

Fisher: A card with a skill that turns Next Puyo into a desired color for a certain number of turns. The word comes from the Fisherboys Series. Other cards with this skill include Hiding Hamsters Series, Amitie ver. P4, Sandra, and MEIKO. Derivations are Gagakushi Series and Spirited Devil Series, which also spawn Chance Puyo, and Yokai Series and Cleaner Boys Series, which also reset the board.

Monocolor lead: A leader card whose boost applies only to cards of one color. Some cards, such as Great Hero Lagnus and ★7 Alt-world Travel Series have leader skill boosts that apply to cards of two colors.

Preemptive: An enemy's attack that occurs before you have a chance to attack.

Painter: A card with a skill that allows you to touch up to a certain number of Puyo to turn them into the desired color within a 10-second time limit. The most famous is the Stellar Mage Series, with others being Assistant Series and Puyo Puyo!! Touch Series. Monster Series is a variation that has no time limit, but you cannot lift your finger while tracing to transform Puyo.

PTS / Puyo to skill: The number of color puyo you need to pop before you can use a card's active skill.

Example of a team with a rainbow lead that could work for endless towers.

Rainbow lead: A leader card whose boost applies to all cards and vary depending on how many colors you have in your team, maxing out if you have all five colors (side colors count). Generally not recommended unless the team's main color is one color while the other four colors are covered by side colors.

Skyfall: Puyo that fall after your initial chain visible on the board has concluded. Depending on your skyfall puyo RNG, your 3 chain can potentially turn into an 6 chain (or even more).

Toughness: A condition in which HP stops at 1 when drained to 0 (one time only, for all applicable enemies in endless towers).

Universal lead: A leader card whose boost unconditionally applies to all cards.

Helpful for ALL floors:

Potentially helpful for many floors:

Others to consider: (if you have spare room)

Required for specific floors:
For floors x0 and x5, starting from floor 35:

The most troublesome feature of x1F is the mirrors, making using powerful dual color cards such as Fests a big inconvenience. As long as you go mono, you don't have to worry about them. If you want to go dual (as I often do with Gagakushi despite the risks), I'd recommend only using one additional color. Be careful not to pop the side colors, but skyfall puyo often ruin things anyway. You may want to bring some recovery skills to counteract this.

Enemies hit very hard on higher floors, but they will never heal, so you'll want to bring cards that can sustainably last (high HP and decent recovery). If you find your recovery is too low to keep your cards alive, you can bring an autoheal lead (Coffee Shop Girls are amazing mono leads for towers) or a card with a recovery skill.

Additional condition: Starting from 12F, no heart boxes will spawn.

Sample team 2 for x2F Blue Tower. The Coffee Shop Girls series heals your team some amount every turn, making the lack of heart boxes trivial if their recovery is sufficiently raised.

From 22F onward, there will be no naturally spawning heart boxes. This can be counteracted by bringing cards with recovery skills or ones that spawn heart boxes or chance puyo, preferably an auto-healing leader or cards whose skills have a low PTS and can be spammed. If going the active skill route, definitely use a Gagakushi or Fisher to charge these skills even faster, and make sure your team has decent recovery stats. Either the leader or one designated sub should be enough to suffice and bringing more than one is redundant.

Every 3 turns, Western Monster Boys alternately do percentage mass damage (25% of your cards' remaining HP) and fixed mass damage (this damage increases as you climb higher; on 42F it does around 3000 if I remember correctly). If you have sufficient healing, it shouldn't really be a problem.

Finally, the Fury condition is VERY DANGEROUS in endless towers, as it doubles damage to cards that have the condition and the floors that utilize it are some of the most heavy-hitting. Because of this I recommend taking out the Thief Dogs as soon as possible, and if any of your cards can gain a

Fury Shield through its Special Training Board, train it.

Sample team for x3F Yellow Tower. Tooru Amuro's trace up skill makes it easier to clear nuisance puyo. Since his HP multiplier is on the low side, the presence of Yue helps by boosting the team's recovery.
The main thing to watch out for on these floors is the nuisance puyo. If you let the number get to 10 or above, the Stellar Mage will inflict a Nuisance penalty that will wipe out your team on the higher floors. Once there are a few on the board, they can get very difficult to clear since you can't trace through them. To make matters worse, Yokai reduce your trace capacity, which can make it even harder to clear nuisance puyo in time. From 23F onward, the Flower Nobility on the last stage will give all enemies 99% shields, forcing you to clear the 4 garbage per turn before being able to wipe them out with your skills.

To aid in getting rid of the garbage, +5-7 trace up makes it easier to trace around the blockage, or a board reset skill can be used in a pinch if the garbage buildup is too much. If you're skilled, a trace up leader is probably enough. You can also always bring board transform/burst skills that will clear the garbage for you. Painter skills (such as your own Stellar Mages) can clear it as well if you paint the Puyos right next to the garbage. If your team is frail, you may want to bring a healing leader or sub, since the damage from Kobbits on high floors can actually rack up pretty quickly. Other than that, just bring some cards that will quickly take out the Stellar Mage so you won't have to deal with garbage for too long.

Poison (3 turns) on all cards.